LIBERATE from the Hidden Oaks series

My inspiration for writing the Hidden Oaks series came from my interest in Mental Hospitals and how society characterizes who belongs in them and who doesn't. I currently am working on my Master’s of Social work and wanted to incorporate that aspect and my all time favorite genre, shape shifters, into a book series. Something that felt personal during writing Liberate, in particular, was developing the relationship between Carson and Tate and what exactly should be said and when in regards to Carson being different from the other Changelings. Even though he eventually shifts, he is worried that he won’t ever be like Carson and his friends and struggles with whether or not he belongs there and should fight against the government corporation, JIA for freedom.


I hope readers will enjoy this read as much as I enjoyed writing it. I liked the inner monologues Carson as he finds his place as an individual and as a mate to a wolf.
Ana Raine 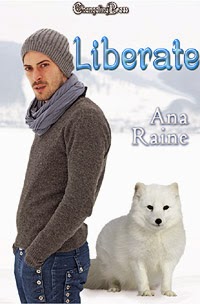 Carson and Tate have been running for months, trying to evade the JIA so they don't end up lab specimens for the ruthless organization. In a last ditch effort, Carson and Tate head to Alaska, where other Changelings are congregating in an attempt to find a way to control their thoughts and emotions when they shift to their animal forms.

The secret to maintaining their human consciousness may lie in Carson's blood, but Carson believes he no longer holds the key to his kind's freedom. With their future on the line, Carson realizes the most important part of his life will forever be his mate, Tate, but how can he trust a man who never tells him the whole truth?

“Carson,” his voice was velvety smooth and sweet behind me. The motel we were currently in wasn’t all that bad, everything considered. At least the locks on the door worked and our room overlooked a pool that didn’t look completely gross.
“You’re back,” I whispered, wrapping my arms around my naked chest. I’d always been slender and small, unlike my very attractive mate who beat me in stature and height. But our lack of eating had only made my frame smaller, if such a thing were possible.
“I’m sor-“
I held up a hand to stop him, afraid my legs would give out beneath my staggering body if I didn’t. “If you’re going to say you’re sorry, please don’t.”
His ice blue eyes softened and he ran a hand through his shiny blond hair. My hair tickled my bare shoulders because of how long it was getting.
I suddenly laughed a nervous gesture. “Do you happen to have any scissors?”
He smiled and joked, “Aren’t planning on giving up, are you?”
“No, just want to cut my hair.”
His eyes darkened as he crossed the distance between us and wrapped his arms around my waist. “Now why would you do something like that when your hair is so gorgeous?”
I blushed all the way up to my ears. Even after all we’d been through, he still did that to me. “What’s in the bag?”
We switched cars and license plates so often; I was starting to feel like we were in an action flick. Tate had gone out alone to get some supplies, which always drove me crazy with worry.
“Ah,” he flashed his straight white teeth. When he transformed into a wolf, his teeth became sharp and even whiter. “Food, clothes, surprise…”
I narrowed my eyes. “What kind of surprise?”
Going over to the bed, he picked through the multiple grocery bags before tossing me one. The first thing I saw was a box of cookies, which I eagerly tore open like a ravenous animal and bit into. The second was a pair of swim trunks, bright blue.
When I looked at him, mouth full of cookie, he held up another pair of swim trunks. Nodding his head towards the pool, he asked softly, “Want to go?”
I swallowed, “It’s practically midnight.”
“Motels don’t have curfews for that sort of thing. And even if they do, I didn’t see a sign anywhere.”
Tate was giving me the most bemused expression so I had to ask. “What on Earth is so funny?”
“You. Even after everything, you’re still one to follow rules.”
I blanched and pulled down my pants so I could change into the swim trunks. “I was going to be a psychologist.”
“You still could,” Tate whispered, eyeing my brief nakedness with a look of raw hunger in his eyes.
“If I can ever remember what I was studying,” I admitted, tying the string securely around my hips.

A GIVEAWAY!!!
Ana Raine will be giving a digital copy of LIBERATE to someone who comments. Be sure to include your email address in your comment to enter to win.

I like the internal conflict you've created in your lead character. For every human advance, it seems there is a price to pay. Keeping his humanity after shifting will surely cost him.
Mental institutions are scary places. Maybe I'm influenced by One Flew Over the Coo Coo's Nest. Now there was a guy (Jack Nicolson's character)who thought he was pulling one over on the authorities choosing to act insane to avoid going to jail. Well, we know how he ended up--not so good. So you've created a deeply emotional and complex story.
I wish you every success.

I have read the 2 books from this series and was captivated by the complex world that Ms Raine has created. I luv that she has managed to take the shifter world and give it a shole new dimension. Looking forward to reading Liberate. The blurb and excerpt are the perfect tantalizers. :) Thanks for the chance to win a copy of the ebook.

Ohhh!! I hadn't heard of this series till now. heh, To be honest I just found Ana through her Neko series but I so love the sound of this series/book.
Not reading the excerpt cuz I want no spoilers. lol...

But thank you so much for the chance to win! :D

It's a really engaging premise and excerpt!

Thank you for introducing me to an new author and their work. I often wonder what inspired a certain story or the thoughts behind a character and the plot. Reading this post made me ponder about who belongs in a mental hospital and reminded me of when I was at college and we looked into various psychology case studies. One was about a women who had been in a mental institution since 1946, so for about 20 years. It said she rambled and spoke gibberish until a new cleaner reported to a nurse that she had been speaking to her. It was then discovered that she was a Polish camp refugee and that in fact nobody had understood her language at the time and she was hysterical so they placed her in a home and then was forgotten about.

Thank you for a chance to win a copy of this book, as I enjoyed reading the extract and have added the books to my wish list. slholland22 {at} hotmail {dot} com

Thank you everyone for submitting your comments. I'm glad you enjoyed the excerpt and I hope you will read or have read the others in the series. I have randomly chosen Loveless3173 to be the recipient of Liberate and will contact her via e-mail.

Thank you for participating in the Romance Room blog. I hope to be a guest again in May when my 3rd Neko book is released.

Congratulations to the winner!!