Today on The Romance Room Blog we have Renee Wildes with an interview to introduce her new release, A Guardian's Heart, Book 1 in her new series Guardians of the Light.

She will be giving away a digital copy of her new release to a lucky commenter. Please leave your contact with your comment to allow us to reach you if you are the winner of Renee's new release.

Thank you for allowing an interview with me at THE ROMANCE ROOM blog.
Sarah J. McNeal 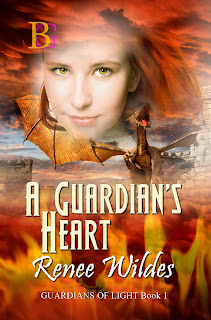 BLURB:
Dara Khan Androcles was trained from childhood to be a healer. But as a demon-possessed invader threatens Safehold, and she defends a wounded warrior on the battlefield, her hidden inner dragon thirsts for blood.
When she lifts the warrior’s blond, blood-encrusted hair away from his ear, she discovers he is more than King Hengist’s outlander ally. He is an immortal. The elven heir to the throne of Cymry.

Loren ta Cedric senses something different about flame-haired, falcon-eyed woman who saves him. A healer, wreathed in raw, dark power, who wields knives with deadly skill. A mortal who prays to the Lady, not the human gods. Now he owes this thoroughly distracting female a Life-Debt. Which, in the heat of their flight to Loren’s homeland to raise an army, somehow becomes Life-Mate.

Dragon-human and elf, peasant and prince, logic says they have no future. Yet the power of their unlikely bond could be the only thing that saves their world from a demon poised to tear it apart.

Warning: This new twist on Cinderella contains a grouchy dragon, a sentient war mare with the dry wit of a certain English Dame, and a fiery heroine who strikes serious sparks with a mercenary elf.


What is the most adventurous thing you’ve ever done?
When I was younger I was really into caving—love being underground & exploring.

What adventure would you like to have that you haven’t done yet if money and skill were no problem?
I would love to tag along with Josh Gates on one of his Expedition Unknown archeological adventures!

Who are some of your favorite authors?  What commonality do you see in them?
Mercedes Lackey, Sherrilyn Kenyon and J.R.Ward – their characters are so multi-faceted and imperfect, like real people.

I believe color says something about a person’s personality.  What’s your favorite color?
I love the grayer shades of light blue—very calm & restful.

If you could have a do-over life, what one thing would you do differently?  What would you do again?
I never would have taken that job after HS at that rabbit farm…
I would marry my husband all over again!

What is your writing process from conception to finished MS?
If I get an idea or concept I write it down. I have an obsessive brain that keeps me up at night, often churning bits of dialogue or whole scenes at ungodly hours. I get by on less sleep these days, but have to take the occasional nap to “catch up.” I think while working my day job and hit the computer as soon as I get home. It’s hard to stay on “this” book when my brain’s crowding in “the next” book (and the next…) I’m a plotter, so if I get stuck on one point, I just do a different scene and piece it all together later. I always write secondary characters with an eye/ear to give them their own book later—that’s how I did seven books in my Guardian of Light series, and now I’m working on their kids, the Daughters of the Guardians.

Are you a planner, panster or both?
I am a total plotter, and what’s worse is, I tend to edit as I write so I’m pokey as all get-out.

How did you research for your book?
Between kids and a day job, I don’t get out much—and I’m always broke! So I live at my local library, do tons of online research, and pick my friends’ brains whenever they get back from somewhere interesting. I love talking to experts in whatever field/skills I want to incorporate in a book.

What is your all-time favorite movie?  TV show?
Movie – tie between Rob Roy and The Last of the Mohicans (Mary MacGregor and Cora Munro are two of the strongest heroines to ever grace the silver screen!)
TV Show – Fiction – tie between The Librarians and BBC’s The Musketeers
Non-Fiction – Expedition Unknown with Josh Gates

How important do feel writing workshops are to a writer?
Writing workshops and conferences are huge opportunities to both network and learn. As a romance writer, I highly recommend joining both national & your local chapter of RWA (Romance Writers of America).

If you could learn one new skill, fear and money no deterrent, what would it be?
I would love to sail around the world in one of those big tall-masted ships! They’re so cool!

If you had a million dollars to donate to any one charity, what would it be?
http://www.nokidhungry.org
I find it appalling, the dichotomy in this country that makes this charity even necessary. Kids need nutrition to grow, to fuel their brains to learn. It’s hard to focus on the future when they’re stuck in a present without basic necessities. They have to have stability and hope.

What advice would you like to give to an aspiring writer?
Don’t write what you know. Write what you love, what interests you and gives you passion. Your enthusiasm with lead to fuller research and a flair on the page that will make it easier for readers to catch the fire as well!

Did anyone mentor you or help you along the way?  Please tell us about your mentor and what you feel he or she contributed to your writing career.
WisRWA author Jane Toombs was a judge for the Fab 5 contest when I entered Hedda’s Sword. She loved it and wanted me to let her know who picked it up b/c she said “You WILL be published.” (It’s Guardians of Light Book 2 – renamed A Guardian’s Hope, it comes out from Champagne in early May 2018.) She is the one who got me to Query Champagne after Samhain folded, and I inherited her entire Colonial American research library several years ago.

What is the best advice anyone ever gave you?
Don’t dwell on the past – always more ahead, move forward.

If you could live anywhere in the world you wanted to, where would it be? (Language is no barrier)
As much as I HATE the cold, I would love to live in Scotland – so wild and scenic, with so much history and fascinating people!

Where do you write?
These days at the dining room table, using my daughter’s boyfriend’s PC, since both of my laptops recently crashed and the Geek Squad recommended a Viking funeral…

How much time do you devote to writing each week?  Do you have a day every week that you take off?
I groom dogs in my EDJ, but I come home and work on something writing-related every day before/after work. If I’m not writing, I’m usually either editing or promoting. (Okay, sometimes I have 4-H or school stuff with my daughter—she’s a graduating senior in HS, has already started college classes, and shows our Morab mare in 4-H & open horse shows.)

What is a genre that you have not attempted that you would like to try?
I have all those Colonial American research books from Jane Toombs, would love to write a 18th century historical romance someday.

Is there anything you would like readers to know about you?
I am a super-history geek – Love History & Travel Channel. You can usually find me getting distracted by Forged in Fire, Mysteries and the Museum, and…oh yeah…Josh Gates! 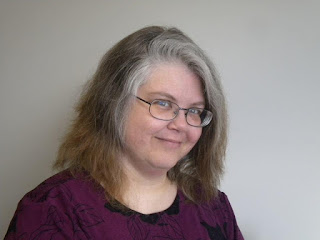 Renee Wildes grew up reading fantasy authors Terry Brooks and Mercedes Lackey and is a huge Joseph Campbell fan, so the minute she discovered romance novels it became inevitable that she would combine it all and write fantasy romance. Renee is a history buff and research junkie, from ancient to medieval times, esp. the Dark Ages. As a Navy brat and a cop’s kid, she gravitated to protector/guardian heroes and heroines. She’s had horses her whole life, so became the only vet tech in a family of nurses. It all comes together in her Guardians of Light series – fantasy, action, romance, heroics, and lots of critters!

Renee, I like what you had to say about being a plotter--me too. Like you, I edit as I go and it makes me pretty dang pokey, too. I don't really know how it works for authors who write without a plot. And what about those subplots? How would an author fit those together.
I loved your warning about grouchy dragons.
Your interview was so enjoyable to read. I've missed you.
I want to wish you all the best and great success with your upcoming release.

Thanks Sarah!
I just remember hearing Bob Mayer & Jenny Crusie commiserating with us at an RWA conference b/c they have completely opposite writing processes and struggled to write/edit "Don't Look Down" together b/c of it! (He's a plotter and she's a pantser. I can't even envision trying to make THAT work! I'd go nuts!)

Ya want ostentatious, raww!kuss,
King-Size-fantasies, huh?
Follow us Upstairs, dear:
we'll RITE for a gawwzillion
years, eternity... and then
have a wildchild, party-hardy.
God bless you. Cya...