WILLA EDWARDS
Willa Edwards has dreamed about being a writer since she was four years old. When she picked up her first romance novel at fifteen she knew she'd found her place and she's never looked back.

INTERVIEW
What adventure would you like to have that you haven’t done yet if money and skill were no problem?
I’ve always wanted to spend more time traveling around Europe. I spent a college semester in England and loved it. I’d really love to go back and spend some time seeing other countries, learning their culture, looking at all that amazing art, and of course, eating all that amazing food. (This adventure is calorie free too, right?)
I believe color says something about a person’s personality.  What’s your favorite color?
I love the color purple. I wear it all the time. My entire bedroom is decorated in it. And I even force it on my cat. Many of her toys are purple (along with her collar and harness that she hates).
What is your writing process from conception to finished MS?
Usually my stories start with an idea, just a glimmer that can come from anywhere. A television show, a movie, another book or even just a story I overhear at work. This idea sits in the back of my head and germinates. By the time I sit down to write, I already know the direction the story will go in (I don’t know everything that going to happen, what would be the fun in that) and the characters have already shown themselves to me.
I write a little differently than many other authors. I work on whatever scene is exciting me at that moment. I don’t write chronologically. It might seem a bit odd to write that way, but it works for me, and somehow, by the end, the story always comes together.
I then slog through three rounds of revisions (I hate revisions, but they are so necessary). One revision for errors in the story, characters, writing, etc. One for grammar, spelling and to delete weak words. One more read through to make sure everything makes sense. Then it’s off to my publisher.
What is your all-time favorite movie?  TV show?
I love Once Upon a Time. The combination of real life and fantasy world is so exciting. And I love how they’ve interpreted many of the classic fairytales.
If you could learn one new skill, fear and money no deterrent, what would it be?
Jewelry collecting, haha. I’d like to learn to scuba dive. It scares me a little to be down under the water that far, but I think the sights would be amazing.
If you had a million dollars to donate to any one charity, what would it be?
It would probably be a tie between Breast Cancer research and Colon Cancer research, since I’ve had family members diagnosed with both.
What advice would you like to give to an aspiring writer?
Just keep at it. Perseverance is 90% of writing. Don’t let an editor saying no, or a negative comment in a critique, deter you from what you want. Just keep writing and improving, eventually someone will take notice.
If you could live anywhere in the world you wanted to, where would it be? (Language is no barrier)
I’m not exactly sure. Definitely somewhere in Europe, maybe France or Italy. Doesn’t matter which country as long as it’s close to the train. That way I could be anywhere I wanted very easily. I’d like to hid away in a cozy little cabin it the countryside where I could do lots of writing, but still have the ability to get to the city enjoy the culture of Europe.
Where do you write?
I’ll write anywhere. As long as I have my computer I’m happy.
I used to write at a desk in my office, but since the cat terrorizes me in my office (she loves to scratch my leather desk chair, which is a bit distracting) I’ve moved to the couch in the living room so she can curl up on my feet.
How much time do you devote to writing each week?  Do you have a day every week that you take off?
I like to devote 30 minutes to in the morning before I really get going and 30 minutes after work. If I can get in more time, that’s great. Writing for me, is the best way to start my day, and the fastest way to forget about work and relax.
What is a genre that you have not attempted that you would like to try?
I’d really like to write a few different historical time periods. I’ve always had dreams about writing a wild western, with pistols at sundown and everything. And a Highlander Scottish romance would be fun to try.
Is there anything you would like readers to know about you?
*** CONTEST ALERT *** CONTEST ALERT *** CONTEST ALERT ***
One lucky commentator will get their choice of any book on my back list. Stop on by my website, www.willaedwards.com, to learn all about my current and future releases. Contest closes at midnight on July 16th. 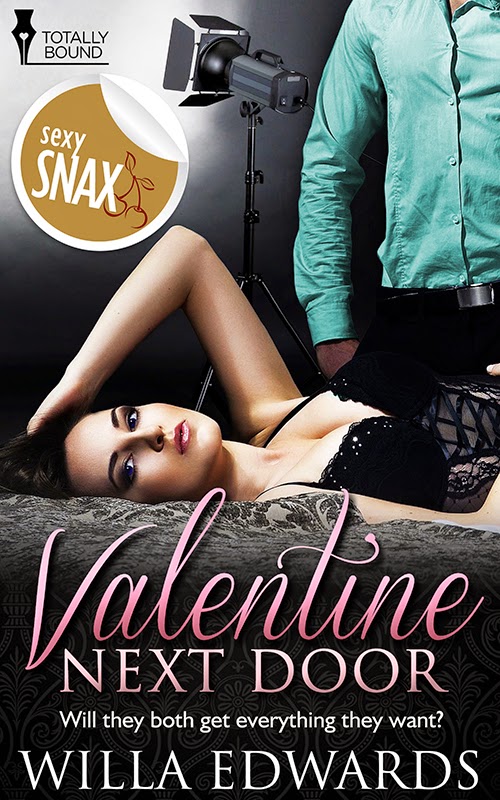 Blurb:
Jeremy Callahan has been in love with his next door neighbor, Miranda Valentine, since he was fifteen years old. As a teen he used to watch her, fantasizing about how he could make her his. But he never acted on it. Miranda was older, married and out of his league. Forced to return home ten years later after being injured on a photo shoot, all those old feelings return, and this time there's no reason to keep them at bay. She might be a decade older than him, but Jeremy's not about to let a few numbers stand in his way.

Since her husband's death, Miranda's been left with a big hole in her life. Never able to fulfil her dream to be a mom, Miranda isn't sure what to do with herself. She certainly isn't expecting to find the most gorgeous man she's ever met next door. She can't believe Jeremy Callahan is that sexy younger man, or that he's had a crush on her for years. When he kisses her, all bets are off. Jeremy's young, gorgeous and makes her feel more than anyone has before.

But she knows he can't want the same things she does. He can't be ready to settle down and start a family, but she's running out of time. Will her dream of being a mother keep her from the man she loves? Or can they find some middle ground where they both can get everything they want?
Buy Link: https://www.totallybound.com/valentine-next-door

“Jeremy?” This couldn’t be little Jeremy Callahan standing before her. The man holding the door open was very different from the boy who had left home.

But he has to be. How many men could the Callahans have wandering around their house with a broken leg?

He smiled at her with the same boyish grin he’d given her that first morning she and Leo had moved into the neighborhood. She still remembered him standing in his driveway playing basketball with one of his buddies a few weeks before his first days of high school.

Jeremy had always been tall, but as a kid he’d been skinny and lanky. He’d definitely grown into his height. His chest was now broad and solid. His biceps flexed as he dropped the doorknob, crossing his arms along his chest. Even his waist was thick with muscle, the kind that would be defined beneath that red T-shirt.

She cleared her throat, gripping the cake container a little tighter in her sweaty hands. “Please, Jeremy. You’re not in school anymore. You don’t have to call me Mrs Valentine. Miranda is fine.”

She liked the sound of her name on his lips. It took her a second to realize she’d never heard him say it before. He’d always been a very polite boy, always respectful. But she was starting to like the man a lot better.

“Well, I...uh, made this for you and your folks. Just a little I-hope-you-feel-better cake.” She handed the dessert to Jeremy, forcing herself to stop rambling.

He grabbed the Tupperware container with quick hands that looked much bigger than they used to.

“Thank you.” He glanced down at the Bundt cake. “Is this mocha fudge?”

“Good. I always loved that cake.” He leaned forward a little, as though to tell her a secret, his mouth moving toward hers.

His woodsy, masculine smell wafted to her across the space between them. His heat and strong presence calling her like a moth to a flame.

“I’ve always had quite a sweet tooth.” He grinned at her. Her mind flashed to what else he could do with those teeth. Those lips. That mouth.

I'm afraid I'm a ONCE UPON A TIME addict, too. I do like the way they change up those fairy tales. My favorite characters are Mr. Gold (aka Rumpelstiltskin) and Captain Hook. I love a character who seems unredeemable, then I see this spark of kindness or pain inside them, and I'm entranced.
I really like how the heroine next door is 10 years older and that she's a widow. That really ups the anty for the hero.
All the best to you Willa. Thank you so much for allowing me to interview you on The Romance Room Blog.

Thank you so much for having me Sarah. It was so much fun. You definitely have some great thought provoking questions.

Wonderful interview, Willa. You are a superb writer. I'm proud to know you. :)

Thank you so much Tina. I really appreciate that. And I feel exactly the same towards you.