We are honored today to have Barbara Donlon Bradley on our TRR blog.

Barbara Donlon Bradley’s writing started innocently enough, she kept diaries, journals, and wrote an occasional letter but her vivid imagination had her writing scenes and short stories, adding characters to her favorite shows and comic books. As time went on the passion for writing became too strong to ignore. Humor dominates her life. Write something deep and dark, will never happen. That humor bleeds into her writing. Since she can’t beat it she’s learned to use it to her advantage. Now she lives in Tidewater Virginia with two cats, one mother in law – whose 87 now, her husband and son. 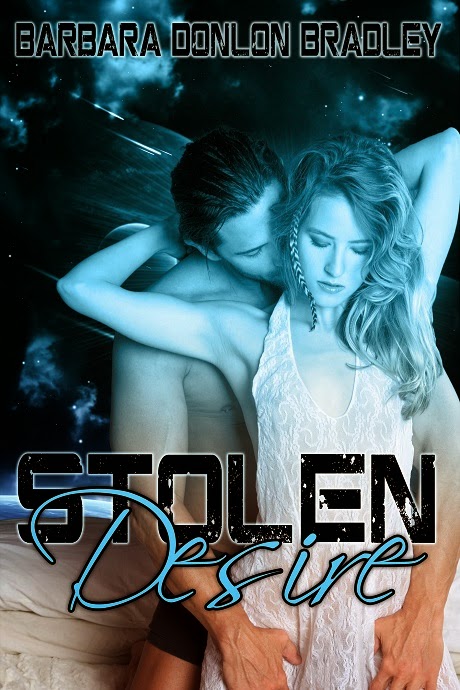 Paperback
978-1-60659-807-8
$12.95
When Heather is confronted with her time traveling self she fears the worse. The woman came to warn them of a terrible accident but something isn’t right. The visitors her future self says are there to help only wants to kidnap her and kill her mate.
Using her mind she tries to protect her friends and family. Yet she wakes up as a prisoner after seeing the ship Storm is in blow up. She is now alone, and trapped.
Somehow she has to figure out a way home and hopefully reverse all the horrible things that have taken her family from her.

Excerpt
Heather sighed as she opened her eyes and stretched. Before she could move she felt a warm hand on her breast.
“I see you’re awake.” Storm’s breath brushed against her cheek.
She looked up at her mate, who had a knowing smile on his face. “And I see you are awake too.” She was referring to the erection pressed against her hip.
“True, but I can’t help it when I have such a wonderful partner lying beside me.” Storm nibbled against her throat. “We still have time before we need to be anywhere.”
“Why didn’t you wake me earlier?” She smiled as he settled himself between her thighs. “You could have had all the time you want if you had.”
“Because the twins aren’t allowing you to get enough sleep yet. I don’t mind watching you sleep when I know you need it. It gives me time to appreciate having you in my life.” He dipped his head to her mark. “And waking you up this way is an anticipation I look forward to. I don’t mind stretching that out a little.”
“Because you know what will happen when I wake.”
“That is the best part.”
She felt him smile against her neck as he pulled the soft tissue of her mark into his mouth before he worked his way down her body.
“You are incorrigible.”
“And that is why I’m your heart.” His tongue lathed her nipple before drawing the tip into his mouth. She arched up against him and he slipped his hands under her.
A growl escaped him when they were interrupted by the computer system. “Heather, you have a communiqué from Admiral Barrister.”
She sighed again. This time in frustration. What did he want now?
“The last time he contacted us you ended up being whipped.” Storm blew against the tip before he climbed back up her body. “I’m inclined to not let you answer him.”
“Storm, I’m still part of Earth’s security.” She looked up at him, his face only inches above hers. “I can’t ignore him.”

Places Where You Can Find Barbara Bradley And Her Books

I really enjoy time travel stories. They can be tricky to write and make believable though. What is the method for your heroine's travel to another time? Is it an innate ability, or does she stumble upon something that transports.
I wish you all the best, Barbara.

In Stolen Desire Heather travels back to their timeline to warn them of a horrible disaster and I use a machine to do this as well.

Just another book to add to my list. I need a week off just to read and not worry about anything but the steamy reads....

Thanks so much for the kind words ladies!

Happily Ever After One Book at a Time said...

Looks like a great read, Barbara - best of luck with your endeavors... ;)

Thanks Lynda and Beverly!