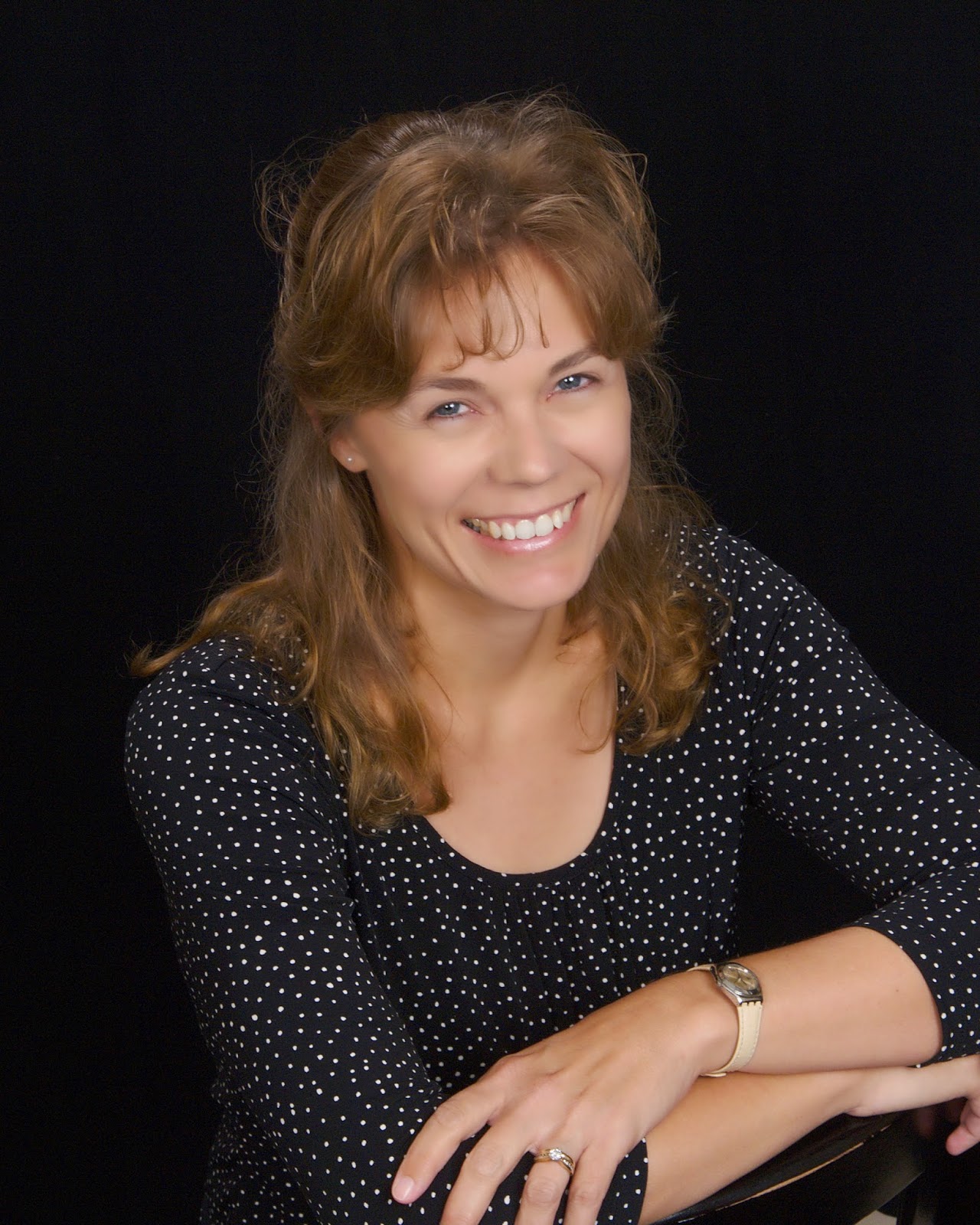 Kristy McCaffrey has been writing since she was very young, but it wasn’t until she was a stay-at-home mom that she considered becoming published. A fascination with science led her to earn two engineering degrees—she did her undergraduate work at Arizona State University and her graduate studies at the University of Pittsburgh—but storytelling was always her favorite hobby. Born and raised in Arizona, and recently returned after a 20-year absence in Pittsburgh, she writes Old West romances to capture the landscapes that were such a big part of her childhood. Her first novel, The Wren, was a CAPA winner for Best New Author Traditional, a Texas Gold finalist, and a HOLT Medallion finalist for Best First Book. The Sparrow was the 2012 Winter Rose Winner in the Published Historical Division. She lives in the Arizona desert with her husband, where they frequently remove (rescue) rattlesnakes from their property. Her four teenaged children are in varying stages of flying the nest, so her two chocolate labs—Ranger and Lily—are the recipients of her maternal instincts these days. 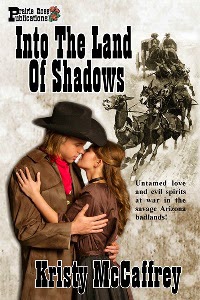 Into The Land Of Shadows


Kristy will be giving away one print copy of Into The Land Of Shadows, a historical western romance (rating: steamy). Please include an email in the comment section; Kristy will contact the winner for their mailing address.


In the land of the Navajo, spirits and desire draw Ethan and Kate close, leading them deeper into the shadows and to each other.


Kate Kinsella has no choice but to go after Charley Barstow and talk some sense into him. After all, he's skipped town, leaving a string of broken hearts and a pregnant fiancée. But Kate didn't count on being kidnapped by a band of criminals along the way! Ethan Barstow is hot on his younger brother's trail, too. He rescues Kate, believing her to be Charley's fiancée and suggests they try to find him together. Kate's reluctance has him baffled. Once they find Charley, can Ethan and Kate realize their own love and happiness with one another through the dark deception and hurt? Or will they both return Into The Land Of Shadows.


Setup: Kate Kinsella has just escaped from three men who planned to use her as leverage against her supposed fiancé, Charley. But Charley’s brother, Ethan Barstow, always planned to rescue her, accompanied by his wolf Bartholomew.

Staying close to the structure, her heart wouldn’t stop pounding and her hands were clammy from fear. She swallowed hard again then turned to run but was caught short, letting out an involuntary gasp when the four-legged creature cut her off with a growl. The animal’s yellow eyes glowed by the light of the moon and he watched her with rapt attention, his body poised for attack.


Another low growl emanated from deep in the animal’s throat and Kate fought the urge to flee. The wolf’s head easily came to her chest; he would have no trouble chasing her down and ripping her to pieces. The gash on her face would pale in comparison to what he would do to her.


A sudden commotion from behind startled her. Someone grabbed her. In a frenzy Kate fought back, kicking and straining against the iron grip the man exerted around her waist. His hold loosened and Kate fell to the ground.


She grabbed a loose board, and screamed as she swung it around, hitting the man’s leg. But he didn’t go down. She scooted backward and scrambled to her feet. The man grabbed her this time, facing her. Thinking it was Clive or Rufus, she continued to struggle.


He held her tight against the building. A sob escaped from deep inside her throat, a sudden maelstrom that matched the wind roaring in her ears, and then Ethan’s mouth was on hers. Hot, insistent, devouring. She molded into him, her lips and tongue hungry for the sudden and consuming contact. She pushed her body against his, clinging to his broad shoulders, desperate to be closer still. He didn’t abandon me. His mouth crushed hers and she felt on fire, head to toe.

I love your mother's advice not to run, but to stay and work it through. It's the best way to learn and to grow.
I imagine it is difficult to work with your husband in the same room all day--but talking on the phone would present a problem to many writers. I like background noise when I write--like something boring on TV.
Into the Shadows sounds like a terrific story, Kristy. I agree with you that there is so much support for writers at Prairie Rose and Cheryl and pulled me through a knot-hole or two as well. When it comes to fantastic covers, Livia is a magician.
I wish you every success, Kristy.

Hi, Kristy--I remember your post on Sweethearts about "rescuing" rattlesnakes. I would do that, too. Well, we have recused a big bull snake, but that's not quite as impressive as a rattlesnake.
I always enjoy your posts and learn more about your way of life.
I'm very impressed by the fact you can share a working room with your husband...I can't quite figure out how that would work. We must have separate rooms!
Good luck with your new release.

Hi Sarah,
Thanks so much for the great interview. You asked such interesting questions that made me think. Prairie Rose has been a wonderful place to hang my hat. And I had the chance to meet you there. :-)

Hi Celia,
Thanks for stopping by. I have to say, there are times working beside my husband is a real pain, especially when he talks on the phone all day. But he does travel, so I usually have a few days a week of silence. Otherwise, it's great. We chitchat throughout the day. He really is my best friend.

What a wonderful interview. I have to say, Sarah does manage to always ask some thought-provoking questions and get to the heart of the matter for each individual person! I think she should be a talk-show host--she'd be great at it!

All kidding aside, I have to say to both of you how humbled I am at your comments regarding my help with editing your projects. Y'all both know, if you didn't have the talent to write these things in the first place, there'd be nothing for me to try to help you improve one. I'm so honored to be the one that had the opportunity to do that. Prairie Rose Publications is a dream come true for me, but in different areas--and one of those areas is the dream of being able to find a way to help other writers "find the best" in their talents. I'm so thrilled to know that I have been able to do that for both of you, and here's hoping for many more projects to come in the future!

Kristy, you have really had some interesting experiences. That touched my heart that your husband would bring you back to your home--I think, because mine did the same thing for me. He is from West Virginia, and worked for the FAA -- they have their big training facility here in Oklahoma City--I was born and raised here in OK, and my father was transferred to WV my sr. year in high school. Anyhow, Gary put in for a job here in OKC and got it, and the rest is history. We've lived here for the past 30 years, and I know he gets homesick once in a while, but I think he's come to love OK almost as much as I do.

Wonderful interview, and I really enjoyed learning more about you! We're so glad you are with us at PRP and now at Tornado Alley Publications, as well!

Hi Cheryl,
Well, I don't want to gush too much, but you've been a real blessing to me. I appreciate our professional relationship more than you could know, and your friendship as well.

Isn't it something when the man in your life brings you home? It still brings tears to my eyes when I think about it.

Great to get to know a little bit about you, Kristy!

I deleted the previous comment because I was thinking one thing and WROTE another. *headdesk* Loved the interview, and it's great to meet a fellow Star Wars fan! I think "don't run" is great advice for relationships, life, and certainly for writing!

Kristy, yes, that is one of the most selfless gifts anyone can give someone else. No matter what circumstances made it happen--it still HAPPENED. Just makes you love those men all the more, doesn't it?

Waving from southeastern Colorado! I loved reading your interview and learning more about you in a personal way. I, too, am a Star Wars fan. In fact, I'm one of the few people I know who enjoys watching Episodes I, II, & III. ;-) I couldn't agree more about the support and camaraderie I've found with Cheryl and Livia at Prairie Rose Publications. It seems that several of we sister authors at PRP feel the same way.

Hi Linda,
Thanks for stopping by!

Waving from southeastern Colorado! I loved reading your interview and learning more about you in a personal way. I, too, am a Star Wars fan. In fact, I'm one of the few people I know who enjoys watching Episodes I, II, & III. ;-) I couldn't agree more about the support and camaraderie I've found with Cheryl and Livia at Prairie Rose Publications. It seems that several of we sister authors at PRP feel the same way.

J.S. and Kaye,
It's always nice to meet fellow Star Wars peeps. My favorites are IV and V. I'm looking forward to the continuation helmed by JJ Abrams.

Who knew we had a bullfighter in our midst? Ole!

Loved your excerpt! Also loved your story in Lassoing a Groom.

Great interview! Wow, fighting a bull that is an adventure! And climbing Mt. Kilimanjaro would be an awesome adventure, I hope you get to do it someday.

All the best with your writing!

Jacquie and Kirsten,
You're right...I'm adding bullfighter to my resume as we speak...thanks for stopping by!

Kristy, I am so sorry to be so late to the party. We are in Oahu visiting sis and bil (second time in two months, yay) and I am soooo on Hawaii time. I did not forget to post a review....I love Kate and Ethan's story's, and even more, the wolf and the donkey. I'll get right on that when home again. Sheesh.

Isn't Cheryl a terrific mentor and editor? Good heavens, even before Prairie Rose, she held my hand during bad writer times.

I love that you rescue rattlers. They are NOT aggressive until people go after them. And staying at Best Friends to volunteer for a while is something I'd love to do...great interview,