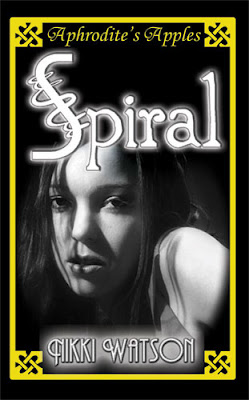 'Spiral' is a Contemporary Romance by Nikki Watson,

When Elena loses her first love, it breaks a part of her, and changes her for a time. She begins to use all those who had been close to her, all those she loved, and suddenly turns away from them, bringing herself into a kind of downward spiral. 'Spiral' is a story that doesn't end in a conventional HEA; it's a Hopeful Ever After, as opposed to a Happily Ever After, but the main character does find a sense of peace in herself before the end.

A song was playing, but Elena didn't really listen to it. She was hearing a different beat in her head, one that echoed with the sensation of too much alcohol drunk in too little a time, mixed with the intoxication of dancing front to front with Stephanie.

Her eyes trailed around the room in distant interest, mainly trying to see where those wolf whistles were coming from. What she caught sight of was Timoth standing, watching from the sidelines, but not partaking. His eyes had taken in how she and Stephanie were dancing together. Elena and Stephanie turned a half circle in their dance, and Elena extended her arm invitingly to Timoth.

Del's attention was already fully taken over by a boy. He had taken up the position of dancing behind her. Both his arms wrapped around her possessively and his eyes stared down her body—breasts, shoulders, bare midriff and fishnet-stockinged legs— from over her shoulder. Del had an expression of bliss on her face as she closed her eyes and gave herself to the wandering hands of her boy as they edged up slightly under the clothing covering her top, and touched bare skin. The boy was pressed up flush against her, with plenty of room still behind him, and the way they were making love on the dance floor made Elena, with Stephanie, feel positively chaste.

Timoth advanced towards Elena and Stephanie, not even looking at Del and her boy as she passed them. Stephanie pointed them out happily to Elena, saying in her ear that this was the boy Del had been trying to get the interest of, ever since she had moved to Christchurch. Elena was amused, remembering Del's former cynicism when they had been together in Ireland. It seemed more than what was on the surface had changed since Ireland.

Arriving behind Elena, Timoth reached out to grasp Elena's hips and draw her back to him, starting to grind his body against Elena, and she pulled an expression of mirth at Stephanie. Rising her eyebrows in response to the challenge, Stephanie stepped closer to Elena again, and the three of them started dancing against each other.

The music changed to something with a harsher beat, and at the start, Elena wasn't quite sure how to respond to that. Timoth was the one who solved that problem, with a direct hold on her hip with one hand, followed by his other hand gripping her just at the side of her breast. His third movement was a pelvis thrust against her butt, pulling her towards him with his other holds on her, and the beat of the music working to his advantage. Stephanie had a hold on both of Elena's hands, trying to draw a willing Elena closer towards her, but Timoth's hold was too firm. She writhed against the feel of him at the back of her, attempting to draw Stephanie towards her if she couldn't be drawn closer to Stephanie. Stephanie stepped forward, kissing Elena on the lips. Then she let go of one of Elena's hands and waved at Elena, before relinquishing her other hand, quietly reminding Elena that she had known Timoth far too long to find the idea of the three of them wrapped in each others' limbs sexy, and stepping off the dance floor, leaving Elena and Timoth alone.

His hold on Elena didn't loosen. Her head leaned back against him, gasping at the painful pull he inflicted upon her body in his firm grasping to get her closer against him. They danced against each other shamelessly, perspiring after several sets, not from the mindless jumping around that most others on the floor indulged in, but from the sexual tension between the two of them. In the moments that she had his attention, that was the only thing that mattered.

Nikki wrote, "I'm more than happy to have people contacting me and friending me. I love to hear from anyone interested in my books or in writing. Thank you."

Nikki Watson.
Posted by Cheri Valmont at 6:52 AM