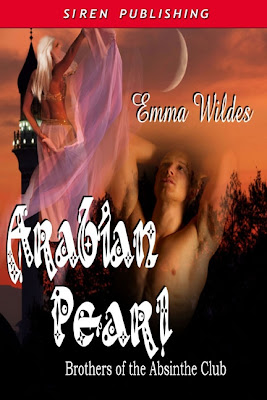 Here's a tantalizing taste of Arabian Pearl, the first installment in The Brothers of the Absinthe Club series.
Excerpt:
“I am leaving you now. I will come for her in the morning.” With that Lela moved in graceful silence across the room and slipped out the door, closing it behind her.
They will be watching as you bed her…Abdul’s warning rang in his head. If Robert spared Rushton’s young daughter, she was doomed. Neither could he simply sit down and explain the situation either. He’d found the small slits in the wall by the bed, cleverly worked into a mosaic relief, and not only would whoever sat there and covertly watched see them clearly, they could also hear anything that was said, he was sure. It would be an insult to his host if he explained to her he was only doing this because he was forced by her circumstances.
The situation was untenable, but there seemed little choice.
Was it rape, Robert wondered, if both parties are unwilling to perform the act?
Well, not precisely unwilling, he reminded himself wryly. He was almost fully hard, and as he approached the bed, he felt himself stiffen further. The beautiful nude woman waiting there was not a sight any man could ignore. She watched him, her lashes still lowered, and he could see the slight rapid beat of her pulse in her throat.
He smiled at her as he sat down on the edge of the bed and reached down to touch her cheek. “What’s your name?”
“Celia.” The answer was hushed almost inaudible.
Yes, that was it, he remembered now. Lady Celia Davenport. “You are lovely, Celia,” he told her, his fingers lightly tracing the full curve of her lower lip. Her mouth was pink and perfect and he urged her to a sitting position facing him, her long hair trailing over her slim shoulders. “I won’t hurt you,” he promised, leaning closer, brushing his mouth across hers.
Her eyes, azure blue at this close range, simply watched him. He kissed her again, a light pressure, tasting her.
“Tell me, where are you from?” he asked for their unwanted audience.
The slight shake of her head told him that she had obviously been instructed to keep silent about her background. “I see,” he murmured, not touching her in anyway except for the drift of his mouth across her jaw. “Can you speak with me at all?”
“If you ask me a question, my lord, I will answer it if I am allowed.”
Inhaling her delicate fragrance, Robert slipped his arm around her waist and brought her closer, into his embrace. Her breasts pressed against his partially open robe and he could feel the warmth of her smooth, pliant skin. Whispering in her ear, hoping it looked as if he was continuing his gentle wooing and trying to ease her fears, he said, “Do not react in any way to what I am about to say, please, but I know your father. I hope only you can hear me say this.”
To her credit, she showed no outward sign of a reaction, but he felt it. Her heartbeat increased and her breathing changed slightly. He moved his mouth to her neck, pressing against that quickened pulse, before sliding upward again. With delicate care, he nibbled on her earlobe, the movement of his lips concealed by her silken hair. “I am trying to free you, but we must do this. If you understand, put your arms around me.”
Her arms slid around his waist.
“And you have to submit completely or you’ll be here forever.”
He hoped only he heard the small sound she made, a sob caught in the back of her throat. Rushton’s pretty daughter had courage, he found then, for she said in a throaty voice that would due credit to any harem girl, “You are very handsome, my lord. I hope I please you well. Whatever you ask, it is my pleasure to give it.”
Review for Arabian Pearl from Romance Junkies:
Emma Wildes' BROTHERS OF THE ABSINTHE CLUB series is off to abrilliant start with this gem of a tale. ARABIAN PEARL satisfies thatwicked fantasy that many women have of being kidnaped and thrust intothe life of a harem girl while still retaining a sense ofindependence and a hope for freedom. I love how Celia changesthroughout the storyline - she goes from a shy virgin to a selfconfident young woman who rejoices in her own sexuality. Robert'sblatant adoration of Celia really endears him to me.ARABIAN PEARL captured my interest from the very first page and heldme enthralled right to the end. I can hardly wait to find out whichof the other men tells his story of daring sexual exploits in THEBLOODSTONE AFFAIR which is due to be released in April 2007.
Rating: 4.5 Blue Ribbons
Reviewer: Chrissy Dionne
To buy, visit: http://www.sirenpub.com
To learn more about Emma, visit: http://www.emmawildes.com .
Posted by Cheri Valmont at 8:49 AM